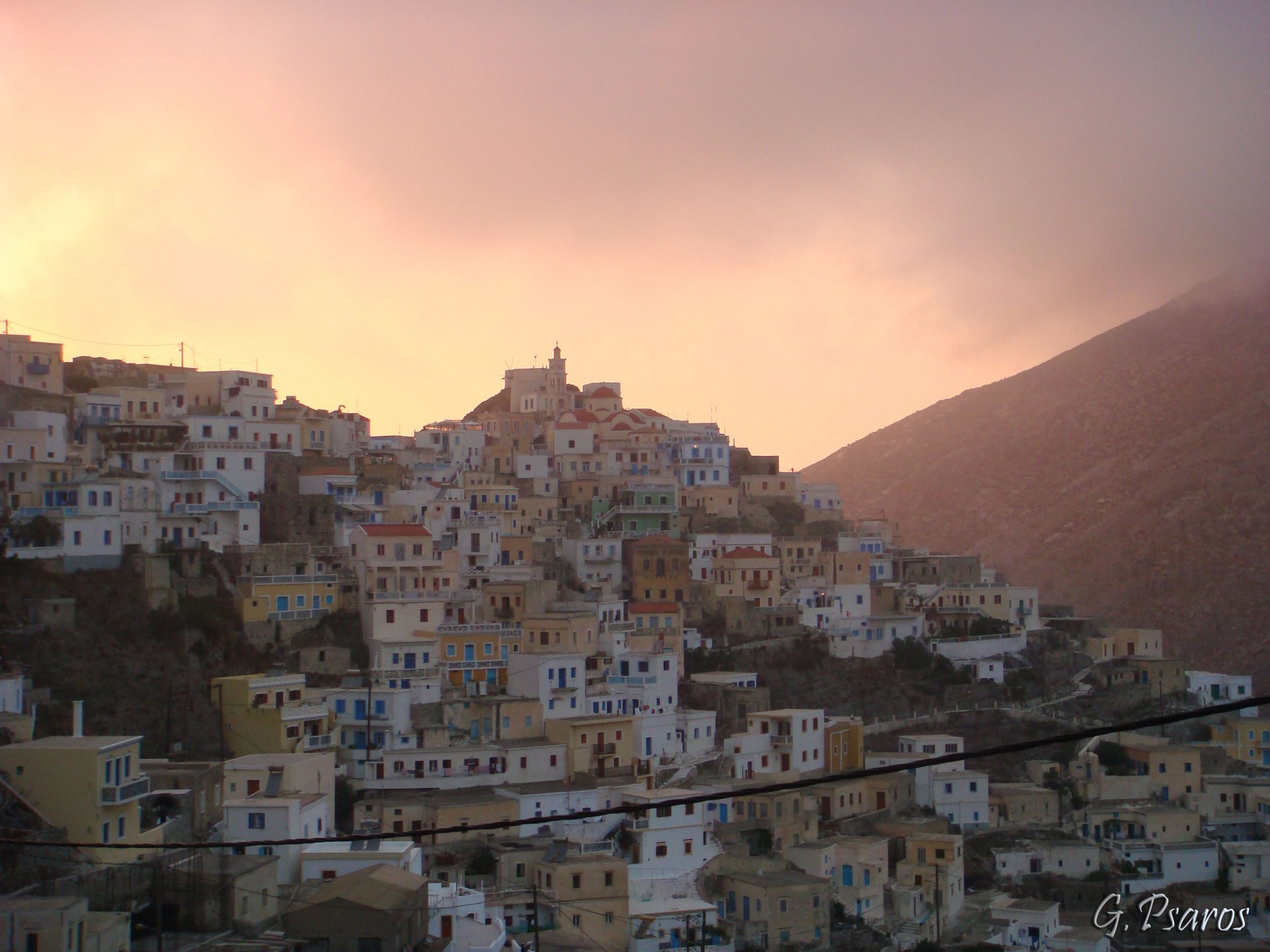 a traditional village on a beautiful island

Olympos Village Karpathos: Olympos is a village of exceptional beauty, located 58 km northwest of Pigadia, the capital of Karpathos. The road crosses traditional villages, beautiful green valleys and verdant cliffs until one reaches the beautiful settlement that lies on the slopes of a mountain.

Houses in Olympos are built amidst lush green forests and preserve their traditional colour and layout. The village itself is a live museum with an idyllic atmosphere when the clouds come down and surround the village.

Today, the village has a population of 400 inhabitants most of whom are engaged in farming and agriculture. Olympos retains an old fashioned way of life where primitive customs play an important role.

Many churches are found close to Olympos village, such as the 16th century church of Panagia in the square that celebrates on August 15th. Every year, on that particular day, the village organizes a big festival dedicated to the Assumption of the Virgin: women wear traditional costumes, men play traditional musical instruments and there is eating and dancing for everyone.

In close distance is Ancient Vrikous, one of the most important cities of Karpathos during the antiquity. Vrikous flourished in the 5th century BC and remains of walls and houses have been found today.

A family small hotel located at the edge of Olympos village. Has four double/triple bedrooms. Staning views and amazing sunsents.

Outstanding seaview in the heart of Olympos

My partner and I stayed at Aphrodite Hotel for one night on 31/7. The views from this accommodation are simply magical. It was great to have a base to stay in Olympos overnight and experience the village once all the day trippers had disappeared and the tourist shops closed for the day. Our host Nikos was very helpful and we enjoyed a metaxa in his bar during the evening of our stay. I'd love to spend more time there.

Best place to stay in Olymbos

i really loved this place!! The best view i ever had! So quiet, so tranquil, so unspoilt, so real and authentic. I loved every minute of it, so much, that i did not leave the room for 2 days 🙂 The owner Nikos a wonderful, genuine human being!!! He runs a taverna a few meters further in the village with his family. A great place to hang out, so not touristy!!! where all the locals meet in the evening. Where the priest plays cards with the men of the village. Fantastic!!! 10 out of 10 for this place!

We spent a night in Olympos, and were blown away by the incredible view from the rooms here! Incredible! The owner Nikos is very charming and helpfull, with many good stories to tell. A visit to his taverna is also recommended! To spend a night here is a must, well worth the winding roads to get to Olympus! Thank you Nikos, see you next time!

This is a hidden treasure in Karpathos! Absolutely jewel! The view is absolutely amazing, it will take your breath away! God bless and all the best to the owners!

The BEAUTIFUL view of the sea was breathtaking. On a clear day, the sunset would be amazing! But the view was still beautiful. It was nice and quiet, on the edge of the village. The owner speaks excellent English and was really cool to talk to! Very nice, easy going guy and his wife made me dinner late in the evening 🙂

The family also owns a traditional taverna in the center of the village. There you can find from breakfast/launch/dinner also all the traditional plates.

The Heart of Olympos

A 5 generation coffe place. The family here makes you feel right at home.
The food is homemade and delicious. Spontaneous live music is just the cherry on top.
A place of countless memories that intertwine here.
The way old and young ,foreign and local can mix in this kafeneion is unique on the island ,making it the heart of the village.
Trully ,I can not imagine Olympos with out it.

Diafani is a traditional fishing village that is located in the northeast of the island of Karpathos at a distance of little less than 70 kilometers from the capital Pigadia. The village is also the second port of the island and many of the ferries that visit Karpathos also stop at Diafani. In ancient times Diafani was the harbour of the present village of Olympos. You can reach Diafani by land via the route over Aperi and Spoa but in principle there is a fairly regular connection with the ferry between Pigadia and Diafani (Anek Lines). It takes about an hour to make the trip but the frequency and the sailing time is also a bit dependent on the crowds and the season. In the high season there are also excursion boats that sail from Pigadia to Diafani to visit the traditional village of Olympos from there. From Diafani it is a 10-minute drive to Olympos (the distance is about 8 kilometer). From Diafani there are excursion boats to the islet of Saria which is located north of Karpathos.

In Diafani you will find apart from the village beach (a pebble beach with grey pebbles) a second beach within walking distance, the beach of Vandana. Vandana beach is located to the north of the village and can be reached via a walking path (the walk takes about half an hour and the beach is very quiet). Along the way you will encounter several small bays with beaches and if you continue even further you will pass more beaches. In the village of Diafani itself is an organized pebble beach where you can rent umbrellas and sunbeds. Around the beach there are a couple of tamarisk trees that also offer a bit of shade. There is a wide choice in restaurants and there are different types of small-scale accommodations, from a number of hotels to apartments and studios that are for rent. There are mini markets and there are three churches in Diafani of which the Zoodochos Pigi is the largest. It is shaped in the form of a cross and has a large bell tower. 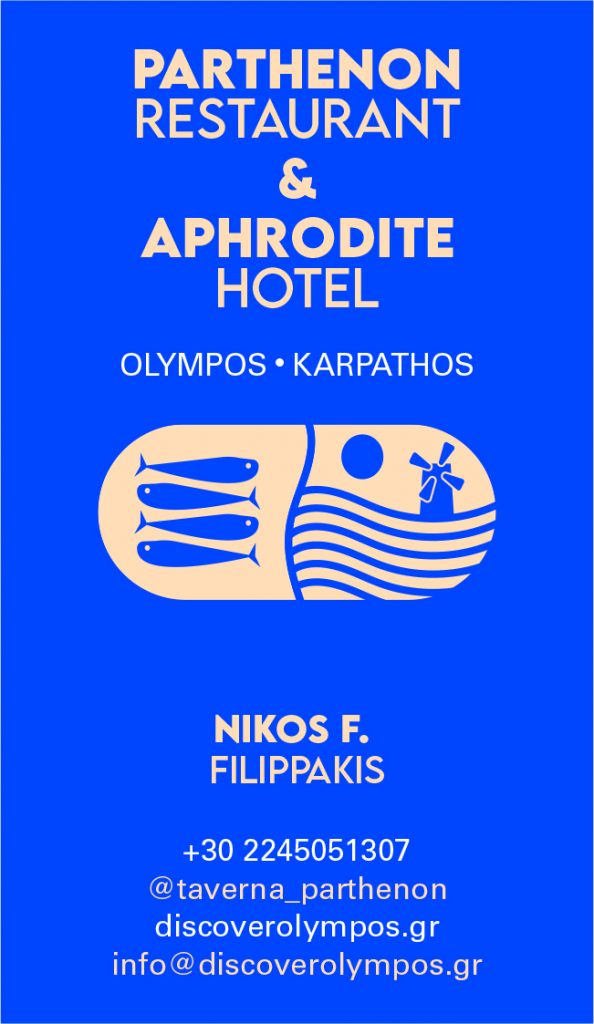 Olympos is an isolated mountain village which still keeps all the wonderfull rich traditions. Also has been described as a “living folklore museum” the visitors can feel and hear from the past everywhere. The special local dialect has remnants of ancient and Medieval Greek, so it’s a one of a kind opportunity even for Greeks themselves to experience some flashes from the past.

A visit to Olympos will be a memorable moment of your holidays.